For healthy aging and to support a normal inflammatory response

Trans-resveratrol, a flavonoid-like molecule found in grapes, mulberries, and other plants, mimics the healthy-aging effect of calorie restriction. A significant decrease in the harmful effects of a high-fat, high-calorie diet was observed in mice, most likely due to increased fat metabolism from the up-regulation of the SIRT-1 enzyme, which acts as a cellular switch by both increasing the number of mitochondria and supporting their function. SIRT-1 enzymes also have a positive impact on blood glucose metabolism, insulin sensitivity, and cell survival. Thorne's PolyResveratrol-SR contains trans-resveratrol – along with synergistic plant extracts and a resveratrol metabolite that together optimize the metabolism and utilization of trans-resveratrol and enhance its numerous metabolic, cardioprotective, hepatoprotective, and healthy-aging properties.

In addition to trans-resveratrol, the other ingredients in PolyResveratrol-SR include:
Pterostilbene: A naturally-occurring methylated metabolite of resveratrol. Pterostilbene exhibits optimal absorption and it is not as easily broken down in the liver. Animal and in vitro studies indicate that while pterostilbene has healthy aging effects similar to resveratrol, it reaches higher levels in the blood and is longer lasting in the body. Curcumin Phytosome, Green Tea Phytosome, and Quercetin Phytosome: Research shows quercetin slows the breakdown of resveratrol in the body, acts as a potent antioxidant, and is synergistic with the activities of resveratrol. Green Tea Phytosome has a positive effect on fat metabolism, promotes optimal liver detoxification, and is very efficiently absorbed. Curcumin Phytosome is significantly better absorbed than standardized curcumin extracts, and studies have found that it supports the body's normal inflammatory response by balancing cytokines and it demonstrates synergistic healthy-aging activity with resveratrol.

Take 2 capsules one to two times daily or as recommended by your health professional. 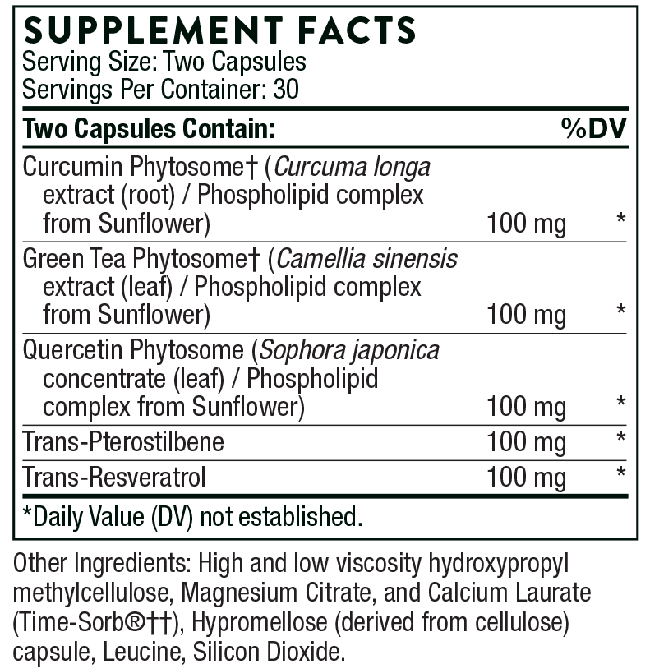