Beta Alanine-SR is NSF Certified for Sport and the PureTab sustained-release delivery system minimizes tingling sensations and maximizes absorption.* Because acidity is a major contributor to muscle fatigue, the presence of carnosine helps maintain a normal pH in muscles by buffering the hydrogen ions created when muscles generate energy.* Thorne's Beta Alanine-SR is required to create carnosine. Supplementing with beta-alanine will support muscle health, muscle work capacity, and perceived time-to-exhaustion in anaerobic exercise that lasts 1-4 minutes and aerobic exercise that lasts longer than four minutes. Carnosine's absorption is poor and tends to be lower in females and in individuals who limit animal protein in their diet. Sustained-release beta-alanine supplementation, such as Thorne's Beta Alanine-SR, has been shown to increase carnosine concentrations in the muscle.

Beta-alanine has been shown to benefit athletic performance. For example, studies show improvements in fatigue in cyclists, in 2,000-meter rowing time trials, in strength in college football players, and in sprint performance in endurance cyclists. Increasing the level of carnosine also provides an antioxidant effect by limiting the accumulation of free radicals from the oxidation of lipid membranes. The PureTab sustained-release delivery system minimizes the tingling sensations and poor absorption associated with consuming non-sustained release beta-alanine above 800 mg. 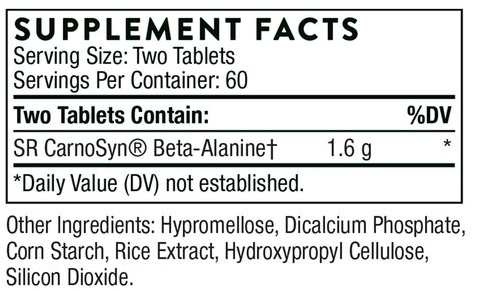