O.P.C.-100 is a grape seed phytosome. OPCs help inhibit oxidative damage, protect blood vessels and eye health, and have been shown to reduce swelling and bruising after injury.

The primary constituents of Thorne's grape seed extract are oligomeric proanthocyanidins (OPCs). OPCs have strong free-radical scavenging (antioxidant) ability, resulting in inhibition of oxidative damage and protection of blood vessels and other tissues. OPCs have been shown to protect vascular endothelial cells from oxidative damage and appear to strengthen the resistance of cell membranes to injury and impairment. OPCs also can bind copper and iron, thereby reducing their oxidative effects. OPC-100 contains Leucoselect Phytosome®, which have demonstrated in studies to reduce the oxidation of LDL-cholesterol in heavy smokers, and decrease oxidative stress in diabetics and in healthy individuals after a fatty meal.

Evidence suggests OPCs enhance the cross-linkage of collagen in skin and other connective tissues. OPCs have also been shown to decrease capillary permeability, which can be manifest as decreased bruising. For example, clinical studies demonstrate reduced swelling and improved resolution of sports injuries in athletes who were given OPCs prior to a sporting event.

A clinical study of 10 healthy volunteers analyzing the effect of OPC supplementation on biomarkers of oxidative stress found significantly increased levels of the antioxidant alpha-tocopherol in red blood cell membranes.

In a randomized human trial, young healthy volunteers received 300 mg of Leucoselect phytosome daily or a placebo. Antioxidant activity was measured at multiple time-points during days one and five. Within 30 minutes after administration on day one, the antioxidant activity measured by "total radical-trapping antioxidant parameter" (TRAP) was significantly elevated compared to placebo. 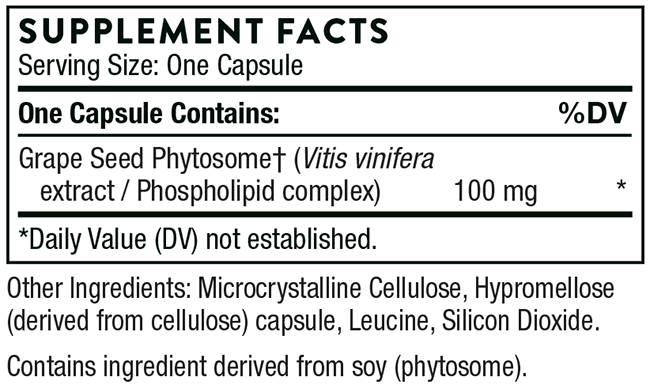