5-Hydroxytryptophan (5-HTP) is the intermediate metabolite produced when the body initiates the process of converting the essential amino acid L-tryptophan to serotonin. Serotonin levels in the body are associated with the regulation of sleep, mood, aggression, appetite, temperature, sexual behavior, and pain sensation.*

Supplementing with 5-HTP to facilitate serotonin production is preferable to supplementing with L-tryptophan because, unlike L-tryptophan, 5-HTP cannot be shunted into niacin or protein production.* Supplementation with 5-HTP bypasses the conversion of L-tryptophan into 5-HTP by the enzyme tryptophan hydroxylase, the rate-limiting step in the synthesis of serotonin and a step that can be inhibited by a number of factors, including stress, insulin resistance, increasing age, and deficiencies of vitamin C, folate, and iron.

5-HTP is well absorbed when taken orally, with about 70 percent ending up in the bloodstream.*

Intestinal absorption of 5-HTP does not require the presence of a transport molecule and is not affected by the presence of other amino acids; therefore, it may be taken with meals without reducing its effectiveness.* 5-HTP easily crosses the blood-brain barrier and effectively increases central nervous system (CNS) synthesis of serotonin.*

5-HTP has been shown to have a beneficial impact on mood, discomfort associated with fatigue, sleep, and carbohydrate craving.* Numerous studies of individuals with negative mood status have shown significant positive response with 50-300 mg of 5-HTP daily.*

To further facilitate serotonin production, Thorne Research's 5-HTP formula contains pyridoxal 5'-phosphate, the active form of vitamin B6 and the necessary cofactor for the conversion of 5-HTP to serotonin.* 5-HTP is commercially produced by extraction from the seeds of the African plant, Griffonia simplicifolia. 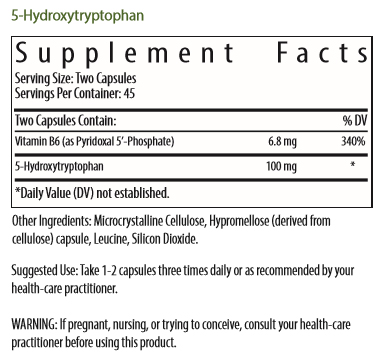